A little more than 10 years in, the popular U.K. indie foursome has notably altered their sound on its new album, AM, some of which singer and guitarist Alex Turner, guitarist Jamie Cook, bass player Nick O’Malley and drummer Matt Helders will perform at the Kool Haus Sunday night. 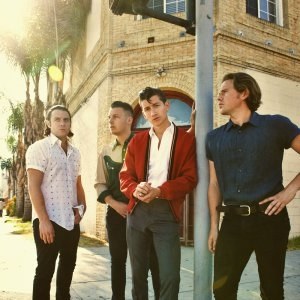 Gone, it seems, is the frenetic flippancy and blustery rock that defined earlier albums like Mercury Prize winner Whatever People Say I Am, That’s What I’m Not — at the time of its 2006 release, the fastest selling debut album in UK chart history — and Favourite Worst Nightmare. It’s been replaced by a more topically earnest approach, and detours into psychedelic and soulful musicianship, as the rhythmic “I Want It All” and “Why’d You Only Call Me When You’re High?” indicate.

“I suppose we’ve broadened our horizons a bit,” concurs drummer Matt Helders, calling in from Paris on Wednesday.
“We’ve always tried to make a record where, if it’s the first thing you’d heard from us, it’d make sense still. We don’t like to rely on previous records, but I don’t think that’s what bands do — make music that’s similar.
“Some people are good at pulling it off, but I think for us, we’re interested in doing something different, but still sounding like Arctic Monkeys.”

Helders said the AM musical direction was predetermined by “R U Mine?” the single with heavy linear guitar motifs and a multitude of drum rolls that the band released in 2012.

“The response that ‘R U Mine?’ had got, and how much fun we were having playing it — it was the best thing we’d done in awhile — so we kind of wanted to explore that world a little bit more,” Helders explained. “I think the thing we took from the song was kind of an R&B influence and a bit more of the vocal production with the backing vocals.
“That set the bar and set the precedent for the rest of the record.”

For the first time, the Arctic Monkeys — a bunch of high school chums that got together in 2002 — relocated to Los Angeles for a year to work on the album with long-time producer James Ford and a newer addition to the production camp, Ross Orton (M.I.A.).

Helders said unlike previous recording sessions, the band was in full experimentation mode.

“I think the most traditional way we’ve done it was on Suck It and See, our last album, where most of the songs were written on acoustic guitar — lyrics and everything — and then we got together as a band to pull out our parts and change certain things.
“But this time we very much experimented together and recorded demos. We’ve never been a band that jams — it’s all quite organized. This time, we were recording our own demos on a four-track recorder. We’ve also ended up with the most versions of each song we’ve had ever, the most incarnations.”

Citing a new comfort level with the recording process, Helders said the most difficult challenge was leaving the studio.

“It is difficult knowing when to stop, because we were experimenting and always wondering what was around the corner,” he admits.
“We had different versions of these songs until we got to the one we enjoyed, but we could easily see ourselves going down a spiral staircase forever because we wanted to make the perfect album. It’s difficult putting restrictions on yourselves, but we knew we were on deadline and going on tour.”

As much as one will notice a creative stretch on AM, Helders said their performance style in concert won’t change at all, save for one important addition.

“We’re probably known for having a minimalist, simple stage show,” Helders notes. “We’ve never been into all the bells and whistles onstage. We’re just no backdrop, simple light show and play the songs the best we can.
“This time around the challenge is we’ve got an extra player — our friend Tom Rowley, who plays keyboards and guitars and who helps out with vocals — because we’ve got a lot more sounds on this record. We wanted to do the record justice by playing the songs as accurately as possible.
“The singing’s been the most difficult part, but we seem to be pulling it off. And the new songs are getting us excited about playing the old songs again.”

As for what he’s listening to these days, Helders said the track that’s got him buzzing is San Fermin’s “Sonsick,” a buoyant brass-riddled chamber pop song that’s the brainchild of Brooklyn composer Ellis Ludwig-Leone.

“Alex and I have been listening to it pretty much on repeat,” Helders confesses. “It’s got a big chorus and is quite epic and dramatic – and great for me to sing along with in the shower.”

Be the first to comment on "Arctic Monkeys evolve with AM"