With the Air Canada Centre decked out like a giant dance club, Arcade Fire got its groove on for a 20-song set.

Even if it came at the expense of Toronto’s much-maligned mayor, it seems that Montreal’s alt-rock artisans Arcade Fire have a sense of humour after all.

A likeness of His Worship — a rotund individual wearing a multimedia box on his head that projected a video loop of Rob Ford’s smiling, chuckling face — was escorted onto the Air Canada Centre stage during the encore Thursday night by bandleader Win Butler, and handed a tambourine, standing there absentmindedly as the 12-piece collective performed “Normal Person” followed by a cover of The Constantines’ “Young Lions.”

And as much as the mayor, who keeps attracting attention to this city for all the wrong reasons, was the butt of yet another joke, the truth is that the gesture went a long way to deflate Arcade Fire’s reputation as a somewhat earnest and precious unit, albeit one that has enjoyed multiple Grammy- and Juno-winning success. 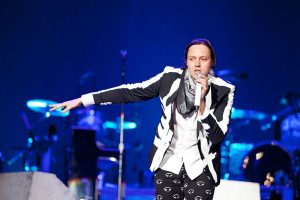 That standing was considerably amplified back in September when the band warned audience members to mandatorily dress up in formal attire or costumes for their forthcoming Reflektor tour, or be denied entrance at the door, a demand that brought them so much public criticism, they were forced to soften their stance.

Good thing, too, because it was clear from the opening sets — first from Montreal disc-spinner Kid Koala and then from Baltimore sound manipulator Dan Deacon — that the evening was geared to be a fun-filled, rhythm-heavy bash.

Arcade Fire was certainly charged with enough manpower to fulfill that mandate, doubled in size from its six-person core to include a couple of extra percussionists, a pair of sax players and longtime associates Sarah Neufeld and Oscar-nominated Owen Pallett on strings.

So in an arena decked out like a giant dance club with a mirror ball hanging over centre ice, and in front of an estimated 14,100 — with a third of them either dressed to the nines or exercising their Mardi Gras cosplay fantasies as gnomes, animals or glittery robots — Arcade Fire got its groove on and kept everyone on their feet for the entire 20-song, hour-and-50-minute set.

Commencing with the impossibly tall Butler, his masked wife Régine Chassagne and Tim Kingsbury performing Neon Bible’s “My Body is a Cage” on a smaller hydraulic stage situated at the opposite end of the arena, the show quickly shifted into dance mode with the disco-driven “Reflektor” and the somewhat spacy “Flashbulb Eyes” as the curtain fell away from the big stage and revealed a mirror-laden set bookended with a couple of honeycomb video screen frameworks. 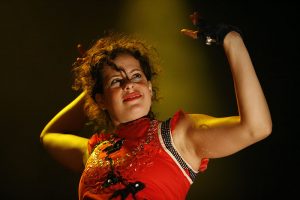 Four songs in, it was the throbbing familiarity of Funeral’s “Neighbourhood #3 (Power Out)” and “Rebellion (Lies)” that really got the party started, with the band performing at full throttle, the flailing limbs of double drummers and the Haitian percussionists fuelling the dramatic tension of the numbers; everyone so finely attuned to their roles within the collective that the harmony-filled, well-oiled musicianship operated at the peak of its powers and reached new heights of exhilaration.

And while the execution never flagged — it was always fascinating to watch multi-instrumentalists like Chassagne jump from keyboards to drum kit to lead vocals for songs like “Haiti” and “It’s Never Over (Hey Orpheus)” or guitarist Will Butler occasionally stepping behind a keyboard — the pacing didn’t always connect.

For example, the aforementioned “It’s Never Over (Hey Orpheus)” seemed to drag on a few minutes more than necessary, as the cross-arena duet between Win Butler and Chassagne seemed disconnected at the best of times. The encore’s “Here Comes the Night Time” also lacked energy, despite singer and guitarist Butler donning a big papier-maché head for his performance and the explosion of confetti and streamers that were released during the temporarily sped-up tempo change midway through the song.

Let’s face it, ballads aren’t The Arcade Fire’s strongest suit, unless they’re anthem-structured and modeled along the lines of a “Wake Up” or something epically grandiose.

But considering everything else that they have going for them, this is a minor concern.

Now that they’ve proven that they can create a carnival atmosphere and thrive in it, the larger hope is that Arcade Fire — nominated for five Juno Awards at the upcoming March 30 ceremony in Winnipeg — drop all and any Rob Ford references from their repertoire when they return for an Aug. 29 date at the Molson Amphitheatre.

Trust me, we’ve had our fill.

Be the first to comment on "Arcade Fire keeps Toronto on its feet: concert review"