Win Butler leads the Arcade Fire into an examination of his childhood.

Nick Krewen
Special To The Star,
Published on Sun Aug 15 2010

On Saturday night at Olympic Island, it seemed to be one or the other for Arcade Fire, the Montreal alternative music darlings who currently possess the No. 1 album on the Billboard, Canadian and European charts with The Suburbs. 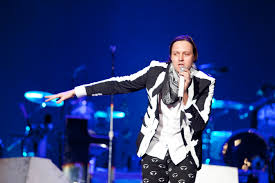 Appearing nine weeks after a pair of surprise shows at the Danforth Music Hall, the seven-piece collective (boosted to eight with violinist Marika Shaw supplementing bow-bearing Arcadian Sarah Neufeld) offered both highs and lows during a 90-minute, 18-song set that leaned heavily on material from both its current album and Funeral, its explosive breakthrough.

With multi-instrumentalist Régine Chassagne joining Jeremy Gara behind the drum kit for the propulsive “Ready To Start,” things began intensely: singer Win Butler stepped up to the microphone and band members jumped and shimmied to the sweet sonic elixir they were feeding the estimated 12,000 in attendance.

Surging forward with “Month Of May,” and the Talking Heads-influenced “Neighbourhood #2 (Laika),” the exaggerated antics of Win Butler and Richard Reed Parry continued to raise the stakes – if there was an additional drum to be pounded for percussive effect, they held it high and bashed it with all their might.

Aside from their technical interchangeability – most members switched instruments at least once during the show – it’s this infectious, passionate enthusiasm that is Arcade Fire’s greatest asset as performers. It doesn’t get much better than hearing a chorus of six voices united as one during the in-your-face rhythmic assaults, and when they build the momentum slowly and threaten eruption – as they did during “Intervention” and “Crown Of Love,” before the latter’s sudden midstream tempo acceleration – the payoff is sublime.

But when the pace relaxes, as it did with an earlier sequence of “Modern Man” and “Rococo,” then Arcade Fire suddenly jars its stature from superhuman to merely ordinary, a lull occurs and the audience’s focus wanes.

Despite Win Butler’s earlier plea to the crowd to “show me something,” it wasn’t until the “Intervention,” “Crown Of Love,” “Neighbourhood #1 (Tunnels)” that they seemed to fully embrace the Arcade Fire experience, dancing wildly and hands raised, clapping along to the pulsating beats.

You certainly couldn’t ask for a better climax, as “Neighbourhood #3 (Power Out)” brusquely collided headfirst into “Rebellion (Lies)” through a calamity of cacophony, with Chassagne’s pounding piano chords flawlessly leading the troupe out of the aural discord.

It was a testament to the band’s excellent musicianship, but Arcade Fire wasn’t the only act to flaunt their technical discipline: making her Canadian debut, Kansas City-born, Atlanta-based Janelle Monáe tore the roof off with a 60-minute marathon that was as exhaustive and forceful as it was overwhelming.

With a crackerjack three-piece band that included guitarist Kellindo, Monáe didn’t so much perform for the audience than at them, wailing, weaving and bopping through a whirlwind of styles that varied from rock and pop to soul and funk – often within the same number. 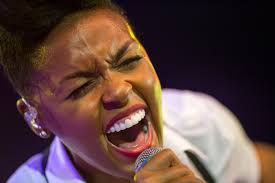 Stylishly retro-fitted in a black cape, white blouse, black trousers and shoes with spats (her entourage was similarly adorned in a white-and-black ensemble, minus the cape), Monáe intrigued and impressed with selections from The ArchAndroid (Suites II and III), a sci-fi Metropolis-inspired concept where she plays the role of a futuristic automaton named Cindi Mayweather.

Perhaps in keeping with the conceptual theme of the performance, there was little acknowledgment of the crowd by Monáe, but her genre-stretching vision – abetted by a voice that seemed to soar to the heavens via sheer lung power – is refreshing and, as evidenced by such knock-‘em-out-of-the-park tunes as “Tightrope” and “Cold War,” highly accessible.

Gifted with an imagination comparable to a Prince or an OutKast, and you know Janelle Monáe won’t be the world’s best-kept secret for long. 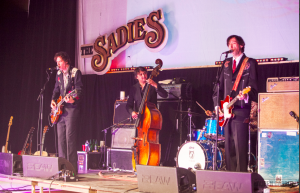 Rounding out the trio of outstanding performers was our own journeymen The Sadies, led by Dallas and Travis Good and deservedly showcasing their country-and-roots inspired Darker Circles.