“The Screaming Eagle of Soul” spun his tales of woo and woe with the gravelly voice of experience before an enchanted crowd at the packed-to-the-rafters Phoenix on Saturday night.

The age of the showman is alive and well, as long as Charles Bradley’s heart is still beating.

Rescued from oblivion at the age of 62, and plying a sound and performance style culled straight from the heyday ’60s-’70s R&B era of New York’s legendary Apollo Theatre, the Brooklyn-based soul man from Gainesville, Fla. — now 64 or 65, depending on whom you ask — is making the most of his opportunity, as he proved Saturday night before an enchanted crowd at the packed-to-the-rafters Phoenix. 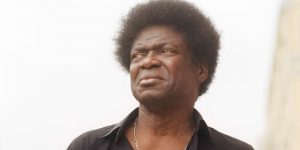 Backed by his insanely tight six-man Extraordinaires, which included a trumpeter and a tenor saxophonist to bump up the electricity, Bradley spun his tales of woo and woe with the gravelly voice of experience, more than occasionally punctuating his songs with the powerful shriek that has earned him the moniker “The Screaming Eagle of Soul.”

His music, derived from the designer R&B sound fashioned over the past decade by Brooklyn’s Daptone Records, is Muscle Shoals-influenced with a touch of James Brown flair.

As for “Black Velvet,” the other nickname Bradley earned while stumping over the decades as a Brown impersonator — one of a myriad of inconsistent and occasional jobs of his well-documented hard-knock life — well, we saw that persona in flashes.

Bradley certainly sported a couple of stock moves — throwing the microphone stand onto the stage and having it boomerang back into his hands so he could hunch over and sing into it for dramatic emphasis was one of them; another was kissing his fingertips and then running them down various parts of his muscular anatomy was another — but for the most part his pomp seemed more spontaneous than planned.

In fact, it’s to Bradley’s credit that he has found somewhat of a unique performing style that also includes its fair share of restraint, despite donning three wildly contrasting costumes.

For his opening “Crying In The Chapel,” he entered the stage wearing a fancy jacket with gold-winged shoulder tips, and stood in front of the microphone, occasionally outstretching his arms as his intense voice cut through the crowd.

Then the jacket came off, revealing a vest, a ripped physique and a gold medallion that hung on his chest, as he began to dance haphazardly to the R&B rhythms being belted out by his crew, heavy on the rotating hips, pelvic thrusting, psychedelic arm waving, then suddenly switching to that old ’80s standby, The Robot.
The 80-minute performance alternated between the stoic Bradley — who belted out favourites from his two Daptone-influenced albums, 2011’s No Time For Dreaming and his recently released Victim Of Love, adding special gravitas to the wailing balladry of “How Long” or “Victim Of Love,” — and the impulsive performer who, at one point wore a sunfire gold lamé jumpsuit that blinded patrons with its sparkle as he channelled his inner go-go dancer.

The highly entertaining show offered a little of everything: a little sermonizing and soapboxing, as Bradley implored his crowd to “make this a better world” as he soared through the pain-riddled “Why Is It So Hard;” a touch of comedy during “Confusion” as he started messing around with a Theremin, bugging out his eyes as he told the crowd, “This is what confusion sounds like,” and manipulating the oscillation with the mere wave of his hands.

Yet there was an admirable undercurrent of humility amidst all the intensity: Bradley seemed genuinely touched that he’s at last commanding the respect and audience numbers a man of his immense talent deserves.

“Without you, there would be no me,” he confessed to the crowd at one point, arms outstretched in gratitude.

So it’s quite evident that after too many decades of singing in the shadows, The Screaming Eagle of Soul has finally landed. May he continue to soar gracefully.