At the recent Ft. Lauderdale kick-off for Mötley Crüe‘s Carnival Of Sins reunion tour, a man sat with Jeff Varner and other associates of the band’s 10th Street Entertainment management firm and witnessed bass player Nikki Sixx demolish his instrument.

He smashed his weather-beaten bass repeatedly against the stage canvas before throwing it into the air, pausing only to watch gravity slam it mercilessly back to earth.

“I heard Jeff later tell somebody, ‘Before it hit the ground, Bernstine’s already bothering me for the guitar!'” chuckles the Bernstine in question — Don Bernstine — manager of acquisitions/artist relations for Orlando-based Hard Rock Cafe International.

“I considered that to be the ultimate compliment.”

So did he get the guitar?

“After the show, I had Nikki sign it,” Bernstine laughs.

In the four years he’s occupied the position, the former director of marketing and promotion for British rock legends Deep Purple has been mandated to secure rock ‘n roll collectibles guaranteed to satisfy the palates of Hard Rock customers all around the world.

“It’s a one-two punch, ” explains Bernstine, 49. “The memorabilia helps get the people in the door and the food keeps them there. Between the videos and the music blasting out of the sound system, it’s a real rock environment.”

Samples of Bernstine’s handiwork can be found either hanging on the walls or locked in display cases throughout the thriving global Hard Rock chain of 122 restaurants, four hotels, two casinos and three hotel/casino hybrids. 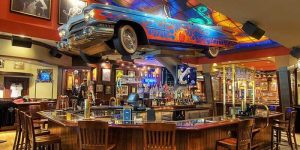 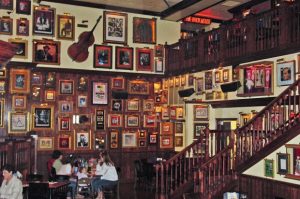 Walk into Toronto’s Yonge Street location, for instance, and you’ll find authentic memorabilia from Shania Twain (her leopard-skin cowboy hats and boots from her desert-shot “That Don’t Impress Me Much” video), Bob Dylan (the acoustic guitar he sports on the cover of 1984’s Real Live album) and KISS (a pair of Paul Stanley platform shoes) among the estimated 200-300 installations.

Even Toronto icons Rush (the custom-made Paul Reed Smith guitar made especially for Alex Lifeson and used during the band’s Presto tour) and Blue Rodeo (a semi-acoustic guitar used by principle singer and songwriter Greg Keelor during recording sessions) are represented to impress the locals.

It’s also a resounding success: co-founded in 1971 by London businessmen Isaac Tigrett and Peter Morton and owned since 1990 by London-based The Rank Group, Hard Rock International reported a 35% increase in profits in 2004 — from $37.7 million to $51 million — based on revenues of $426 million.

There’s no doubt that the Hard Rock franchise owes much of its popularity to its rock ‘n roll pedigree.

“You try and hit a lot of hot buttons,” says Bernstine. “You want to hit on certain eras like Elvis, Beatles, Stones. There are certain genres that you want to represent. And in each location we like to have local artists that are represented from that particular city or area, and try and do something specific to that so the local crowd can relate to that.”

But Bernstine isn’t only interested in artifacts from bygone days.

“We also want to establish a stronger presence of newer artists, too.  That’s something I’m working on a daily basis. If it’s a cold call to John Mayer‘s people just to introduce myself, and get the ball rolling, I spend one day a week reaching out to people I don’t know because the Hard Rock Collection is the largest of its kind, so it speaks to itself.”

“One of the weirdest things that’s sitting in the Orlando warehouse right now is a small portable television that John Lennon must have used while he sat in bed or had on a nightstand,” says Bernstine, whose duties also includes cataloguing each new asset. “I guess he got bored and started carving little drawings and his name onto the side of it. It’s a hopelessly outdated television, the days prior to cable, but it’s pretty unique.”

So where does he find all this neat stuff?

“From a variety of sources,” Bernstine replies, “Our favorite way is to get it from the artist directly and that’s where I come in – I worked for Deep Purple and in the record business and radio industry for a long time, so I have a pretty wide reach with contacts in the music industry. Every year I try to up the percentage of direct acquisitions from artists.

“We also rely on auction houses like Christie’s and Sotheby’s for some of the harder-to-get, more expensive high-end items — especially items from the Beatles and Elvis: Things that are much scarcer, much rarer, but traditionally show up in auction environments.” 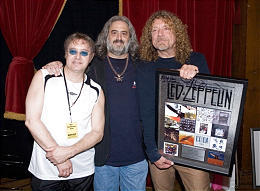 Not everyone is co-operative.

“The two artists I’ve attempted to get repeatedly – and are very accommodating to meet with me and talk to me, but they just aren’t willing to do anything – are Metallica and Jimmy Page,” says Bernstine. “Jimmy’s a bit of a collector who I think still has a strong bond to the guitars that he still uses.

“And the Metallica guys have tons of stuff – they just aren’t interested,” he laughs. “They’re very funny about it. They gave us a car from one of their videos, but as far as instruments and things like that, I haven’t been able to get anything from them.”

If the Led Zeppelin co-founder and subjects of the recent documentary Some Kind Of A Monster ever change their mind, Bernstine assures them their donations will be permanent.

“We don’t ever purge,” Bernstine assures. “We don’t sell. Once it’s in the collection – it stays.”

And if something turns up in the collection that a musician wants back, Bernstine is willing to talk. He remembers the time Peter Frampton called to retrieve a custom-made Zematis guitar that had accidentally found its way into the Hard Rock annals.

“Whenever we get a call like that we always try and comply, because it’s goodwill with the artist and generally they’re willing to give us something back,” says Bernstine. “To my amazement, Frampton gave me the suit that he wore on Frampton Comes Alive. He pulled it out of the Rock ‘N Roll Hall Of Fame and gave it to us. So we do get those calls.”

In fact, Bernstine says the inclusion of a piece of memorabilia in a Hard Rock Cafe is almost as big a thrill for the musician as it is for the public.

“Having your stuff on the wall for a musician is like a badge of honour – it’s like being included in a very exclusive club.”

Be the first to comment on "A Trip Down Memorabilia Lane"