TORONTO — His outlook may be sunny, but it’s raining in Jon Bon Jovi‘s heart. 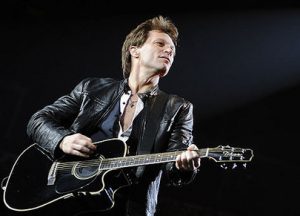 The 35-year-old leader of his namesake rock band Bon Jovi, one of the world’s most popular, is on the phone from New York promoting the release of his latest solo album, Destination Anywhere, its accompanying film short, and his budding acting career.

“I’m juggling!” declares New Jersey’s other favorite native son, who outguns Bruce Springsteen with over 75 million albums sold and is memorable for such melodramatic chart-toppers as “You Give Love A Bad Name” and “I’ll Be There For You.”

“I’ve got movie offers, touring offers, and a wife and two kids who want to go to the beach. So I don’t know what I’m doing next.”

But Bon Jovi’s chipper disposition fades at the mention of Gianni Versace, the senselessly murdered Italian fashion designer who hired the handsome singer as one of his celebrity models for an ad campaign early last year.

“I knew him very well, and I’m feeling a lot like the weather in New York today: pretty grey and rotten,” Bon Jovi sighed Thursday evening from the Big Apple office of his record company.

“I’m still in a terrible funk. He was a friend of mine, and a sweet, giving and talented individual who would ask nothing of you and give you everything.”

The 50-year-old Versace was shot and killed July 15 at the gate of his Miami Beach oceanfront mansion.

“He was cheated! He was truly in the prime of his life, enjoying his life. When I say he was a generous man, it was an understatement,” adds the singer.

“Maybe for the safety of any others that he might have harmed,” he said. “But it doesn’t do us any good that he’s caught or dead or whatever. It should have never happened. There was no way of stopping it. Gianni went for a paper just two blocks from his house.”

He pauses to collect his thoughts.

“Yeah man, it was really a tough week.”

Despite the loss of his friend, Jon Bon Jovi has many reasons to smile.

His second solo album Destination Anywhere has already racked up a respectable 87,000 units in Canada only six weeks out the gate, and the opportunity to stretch his creative arms while bandmate Richie Sambora tends to his own solo album and impending family life with expectant actress wife Heather Locklear has allowed him plenty of time in front of the camera.

“For someone like me who has done nine albums, the thought of having to make four or five more videos was like having my teeth pulled,” says Bon Jovi, whose Canadian album sales exceed 3.5 million units.

“So I wanted to very much be an innovator and change it up a bit, develop a movie around the record. When director Mark Pellington came up with this theme, he took key lines of lyrics, turned them into dialogue, and had a scriptwriter help us write a proper script around it.”

Bon Jovi says his role in Destination Anywhere — a grim tale of loss, pain and survival — gives him a whole new creative outlet.

“One thing that acting does for me is that it gives me the opportunity to start over again in something that is still the arts,” he explains. “It’s a way of expressing yourself, and yet I don’t have to write it, which is really interesting for a guy who has always been in control to relinquish all control.

Recorded in London, Amsterdam, Vienna, Philadelphia, Los Angeles and New Jersey, and using a coterie of producers that includes ex-Eurythmic Dave Stewart and longtime songwriting pal Desmond Child, Destination Anywhere  is perceived by Bon Jovi as a blueprint for his future.

“Reinvention, you know?” says Bon Jovi, whose band will enter the studio in 1998.

“This record is a big departure in the whole band sound, with the production being less anthemic and more introspective. I think the goal of what we set out to do here, is to bring whatever influences I find on the outside — and for Richie to do the same on his solo project — and meet in the middle, to create a new sound for the band.”