Welcome to the first in a new quarterly series, Upstarts, profiling very young SOCAN members who are making some noise with their original music. First up: Moscow Apartment.

Moscow Apartment, the young Toronto duo comprised of 15-year-olds Brighid Fry and Pascale Padilla, has already piled up the accolades in just a year of existence.

The Rosedale Heights School of the Arts-attending besties were named Best Young Songwriters at the Toronto Music Independent Awards and Best Young Performers at the 2017 Canadian Folk Music Awards. They were a recent hit at the city’s 16th annual Winterfolk Festival, and spent last summer touring the festival circuit across Canada – performing at The Winnipeg Folk Festival, Guelph’s Hillside Festival, and the Shelter Valley and Summerfolk fests.

In September of 2017, the duo released a Samantha Martin-produced, self-titled, five-song EP that has garnered them nationwide attention, as original songs like “Francis and Isolde,” “Annie” and “The Things You Do” reveal an innate maturity, and a sweetly beguiling vocal balance that sounds simultaneously demure and bold.

“Mostly, our musical bond comes from us being really best friends,” says Fry. “We’re really close, and that influences our dynamic in the band a lot.” Adds Padilla, “It had never been so easy to write with somebody before. I think we have a familiar vision as to what we want to put out there.”

Moscow Apartment formed when, after losing touch for a few years, Padilla attended the release party for Fry’s Fox Hat EP in October 2015, and the former “carpool choir buddies” re-connected.

As songwriters, Fry started earlier than Padilla, bitten by the bug “in Grade 1 or 2. I had this really mean substitute teacher. I got really annoyed and I just wrote a song about how mean she was,” Fry recalls.

Padilla needed a bit of coaching. “In Grade 5, I started working with Girls’ Rock Camp and songwriter Kritty Uranowski,” she says. “I was always writing songs, but I didn’t have guidance on structure or how to be creative. She really teaches people, especially young girls, and fosters that creativity.  I felt like I wanted to write even more, [just] so I’d have stuff to bring to her.” 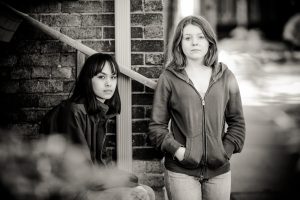 “We fought quite a bit over the summer, but I think that made us closer.” – Brighid Fry of Moscow Apartment

Padilla also said she learned a lot about personal growth from producer Samantha Martin. “She taught me to be a kick-ass person,” she explains.

The professional and personal mettle of their friendship was tested during last summer’s folk festival run, especially since they decided to drive to Winnipeg through Northern Ontario. “We’ve learned [that] it’s not good to camp for two weeks straight with your best friend— because you fight,” Fry says with a chuckle. “We fought quite a bit over the summer, but I think that made us closer.”

Padilla agrees that even frequent arguments can be galvanizing. “You get into fights because you don’t have that professional distance,” she admits. “It makes us work together and get through tough times.”

And both young women found the festival circuit to also be inspiring, both personally and creatively. “You go to all these festivals and you find it’s like a community – this miniature town,” says Padilla. Fry also found the experience educational. “We got to meet a lot of amazing people and learn a lot in the songwriter programs,” she admits. “‘It made me want to do even better. I really want to feel like I deserve a place in these festivals. I feel there’s still a bit of an imposter syndrome, although obviously we work hard.  But it makes me want to work even harder to be successful, and really feel confident being there.”

Moscow Apartment started out simply at first, with influences ranging from Joni Mitchell and Kendrick Lamar to Brooklyn indie rockers Big Thief. “When we both started, it was ukulele and acoustic guitar,” says Fry. “We’re still definitely rooted in folk, because that’s what we grew up with, and that’s still a big part of our music.  In the last six, seven months, Pascale and I started listening to indie-rock stuff, and that’s influenced us, because we’re teenagers – our personalities change really quickly, and you can see that in our music from song to song. It’s more reflective of us creating our own style as teenagers. Both folk and rock feel really natural for us right now.”

For now, Moscow Apartment is setting sights on recording new music and reflecting upon a wildly successful first year.  “Honestly, I don’t think we expected to do this much in a year,” Fry admits.  “We just started. We want to keep growing as a band and have stuff occur organically.”

Padilla says they’re in this partnership for the long run. “I can’t imagine my life without working with Brighid,” she says. “It’s cool working with someone who I love so intensely.”