The Kills come to life after breaking their brain | Toronto Star

Time with Jack White shook up rockers coming to Kool Haus on Feb. 7.

London-based garage rock duo The Kills has often been described as marching to the beat of its own drummer.

However, when American Alison “VV” Mosshart and Brit Jamie “Hotel” Hince headline at Kool Haus on Feb. 7, they’ll be bringing two of them. 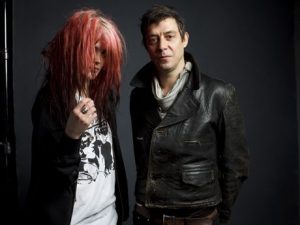 “Yeah, we have a couple with us,” confirmed Mosshart down the line from a New Orleans tour stop a few weeks back. “They’re kind of a human drum machine — they just play exactly what the drum machine is playing.”

“It adds a better dynamic for the room, because we’re playing bigger stages, and it’s sort of nice to have that thud come from the stage,” she explains.

“Visually it works, and it’s really quite striking. You have them up there, and it looks like it’s the most miniature marching band you’ve ever seen.”

Blood Pressures is The Kills’ fourth album in its 11-year-plus history, but the first one following a hiatus that saw Mosshart join forces with Jack White to record, release and tour two Dead Weather albums, Horehound and Sea of Cowards.

Mosshart said her Dead Weather hiatus was the creative kick the duo needed to forge new territory in Blood Pressures, the most nuanced and well-rounded Kills effort.

“All of a sudden, it was like we were kind of coming from two different universes,” Mosshart, 33, recalls. “It was so easy to write songs that we had never written before . . . when you’re with someone almost 24 hours a day for 10 years — which is almost what we’ve done — you kind of almost have one brain.

“Sometimes it’s hard to break that brain down and get somewhere else.”

Mosshart said the end result was a much quicker recording process.

“It moved really quickly, compared to a record like Midnight Boom, that took a year and a half to do. Blood Pressures took six months, tops — and maybe less.”

The Kills story began in 2000 when Mosshart’s Vero Beach, Fla. punk band Discount toured the U.K., and she ended up staying in the same flat as Hince. “I loved it there, and I met Jamie, and I felt like, in my mind — I was like 18 or 19 — this is the person I need to make music with,” says Mosshart.

The two struck up a correspondence, exchanging musical ideas by snail mail.

“It was a wonderful, beautiful thing,” says Mosshart. “Every month, one of us would receive a box, and we’d fill it back and forth . . . not for any reason other than that we loved doing it, and we both have four-tracks.”

Finally, the day came when Mosshart made the damn-the-torpedoes decision to work with Hince.

“One day, I just woke up and I didn’t want to live in Florida,” Mosshart remembers.

“I remember calling him and saying, ‘I’m going to move to London,’ and he didn’t believe me at all. A week later I showed up with all my s–t, nowhere to live and no money.

“I do believe it was on that day he had gotten on a flight to New York to go work on someone else’s record, and I was, ‘Uh-oh! I’m here — I’ll wait ’til he gets back.’ And that was it, really.’

“I was so adamant about it, it scared him.”

Mosshart said it took another year and a half of getting to know each other before The Kills became a reality. She still can’t put her finger on why she became so obsessed on working with Hince, who made headlines last summer when he married supermodel Kate Moss.

“You meet some people and you feel like you’ve known them your whole life,” she says. “And when he started playing his guitar, it’s like my favourite sound in the world.”

Lately, The Kills has been generating considerable buzz for “The Last Goodbye,” a heartfelt waltz that Mosshart describes as “very bluesy, Patsy Cline kind of thing that took me five minutes to write.”

Gaining equal attention has been the accompanying video, directed by their pal, Oscar-nominated actress Samantha Morton.

A photo booth serves as a backdrop for the black-and-white piece, which features Mosshart occasionally singing the song, while Hince makes faces. The whole shoot lasted only a few hours.

“We went through the song about 10 times,” she says. “I think doing my hair took longer.”