The boys of Simple Plan certainly had their work cut out for them.

Headlining a four-band bill, the five-piece Montreal punk-pop band faced the unenviable task of closing for Vancouver’s Marianas Trench, who had just finished mopping up the Air Canada Centre general admission floor with a superbly bombastic performance that delivered the two ingredients that make for a spirited concert: chutzpah and surprise.

Considering that Simple Plan has had twice the amount of experience, material, and more importantly, time, you’d think they would have had an easier go of it. 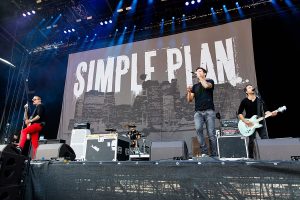 But the first hour of their 90-minute set to support their fourth and latest album, Get Your Heart On, was surprisingly flaccid. Singer Pierre Bouvier and crew were certainly affable and capable enough, with fan-friendly anthems like “Can’t Keep My Hands Off You,” “You Suck at Love” and “Addicted” executed flawlessly, but there was a noticeable air of contrivance surrounding the whole production.

Clean and polite may be a Simple Plan hallmark, but after the somewhat spontaneous experience of Marianas Trench still fresh in their minds, big lights and video screens weren’t going to cut it. A serious sign of trouble emerged when a cover medley that veered from Maroon 5’s “Move Like Jagger” (with Bouvier tastelessly imploring the ACC women to “show us your boobs,” because they obviously weren’t motivated to flash them on their own) to Taio Cruz’s “Dynamite” and capped with LMFAO’s “Sexy and I Know It” was more compelling than anything than the band had performed up to that point.

So who came to the rescue?

The hard-rock-pop vixen filled the duet role of “Jet Lag” occupied on record by Natasha Bedingfield, and quite simply, as bassist David Desrosiers mentioned after the fact, “killed it.”

Moreover, Dobson’s dynamic performance really drove home the stature of where she should be compared with where she is — due to some bad breaks: the woman really should be headlining arena shows at this point in her life. The stage loves her.

But back to Simple Plan, whose takes on “Welcome To My Life” and “I’d Do Anything,” thanks to more animated efforts by Bouvier, who ventured into the audience for the former, and bassist Desrosiers, who briefly surfed the crowd in the latter, seemed less forced and less planned thanks to the Dobson pick-me-up.

The whole Simple Plan scenario probably would have enjoyed a greater reception had they not done Marianas Trench the colossal favour of allowing them to, well, show up.

There was no audience pandering during the Marianas set, although plenty of theatrics: From the moment he emerged from a giant toy box that was wheeled onto stage, singer and guitarist Josh Ramsay commanded attention.

Dressed in a white button shirt and red leather pants, his hair frosted with sparkly silver tips, Ramsay sang the opening strains of “Ever After,” and “Haven’t Had Enough,” and the estimated 8,800, mostly female patrons were singing along, their leather lungs resonating louder than any time during the Simple Plan set.

Short, catchy riffs and memorable harmonies were just two effective devices that Ramsay seems to know how to exploit, and the entire Ever After fairytale concept of the band’s third and latest album was neatly delivered with just the right amount of theatrics to inject a little unpredictably in what could have easily been routine.

Whether it was Ramsay strolling into the crowd around the arena, surprised security guards 20 paces behind him, or suddenly ending their set with “Porcelain,” the stage falling dark with the audience clamouring for more, this spontaneous approach of taking the show to your audience rather than waiting for them to react bodes well for the band’s future.

If Simple Plan threw as much caution to the wind, the chances of being upstaged by a band that received a fairytale reception would be minimized.

Or they could just hire Fefe Dobson to join them onstage every night.