Sean Lennon tours his psychedelic new sound
The Ghost of a Saber Tooth Tiger, a collaboration with his girlfriend Charlotte Kemp Muhl, makes two stops in Toronto this month, including Tuesday at the Hoxton.

Lennon, 38, son of late Beatle John and avant-garde artist and musician Yoko Ono, and brother of Julian, says the duo’s recently released Midnight Sun on their own Chimera label is more representative of their artistry than the sweet pop vagaries and harmonies of 2010’s Acoustic Sessions and 2012’s La Carotte Bleue. 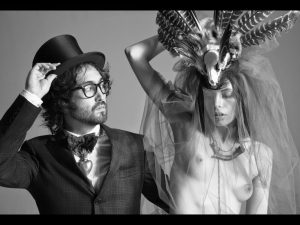 Sporting an adventurous psychedelic pop feel worthy of Sgt. Pepper, with Kemp Muhl and Lennon imbuing Midnight Sun’s dozen songs with self-taught instruments that include vibraphone, kalimba and calliope, Lennon calls the album “a more accurate vision of GOASTT.” It’s a vision they’ll project in concert at the Hoxton on Tuesday and again when they return to Toronto opening for Beck at the Sony Centre for the Performing Arts on June 27.

“The first two things we published were never our intention of how we wanted to represent ourselves as a band,” Lennon said from an Omaha tour stop Thursday.
“They came about because of other reasons. For example, The Acoustic Sessions was a series of demos our manager thought we should put out as a barebones introduction to the band, a ‘meet the GOASTT’ type of thing.
“La Carotte Bleue, which we never really intended to release, was put together as something to sell for this arena tour as openers in France. Both of those albums felt like a parenthetical footnote leading to this one, the first proper album.
“They’re not fully realized ideas and I think it’s obvious. As long as people don’t think they are, then we’re fine.”

In fact, Lennon, who shares lead vocal duties on the road with Kemp Muhl while he plays guitar and she plays bass, says that even he is discovering further nuances in Midnight Sun as they tour as a six-piece.

“I think a lot of the reason we wind up playing everything ourselves is just out of habit,” he explains. “It can get a little insular and you wind up uninspired because you can only go as far as your hands can take you.
“When you bring in people as talented as our band, you bring in a lot of energy, ideas and excitement. So I would say I’d prefer playing our songs live to the album: not only because we’ve had more time to live with them, but also because these guys are so good and they bring a lot of magic.”

Lennon, who has released five albums as a solo artist and worked with Cibo Matto, also says he’s usually not comfortable with any batch of released songs until he’s deep into the tour schedule.

“Every record I’ve made, I know how the songs go after the second tour,” he admits. “It gets very frustrating because you put out the album, do one tour, and then by the end of the second tour, you start to feel like, ‘Oh, this is how the song should really go.’ So I’m always chasing my tail in that way.
“If you look at the ’60s and ’70s, bands would be trying out material on the road, and then go into the studio and play it when they’re really hot and the music is well-rehearsed. But I’ve never been in that situation.”

Nor is he likely to be, with today’s prevalence of cell phone video and instant YouTube posts.

“You can’t play all your new material live, or else it’ll be published each night on YouTube or cellphone videos or whatever. If you want to have an album of new material, you sort of have to keep it to yourself.”

Manhattan-based Lennon and Kemp Muhl first met at the Coachella festival in 2004, and he says the couple probably wouldn’t be together if they weren’t collaborating.

“Our romance and our creative relationship are really, really intertwined,” he explains. “In our case, I don’t think we would have had a relationship at all if we didn’t have the band, because I would have been off touring (2006’s) Friendly Fire and Charlotte would have been off modeling in some other country. We just wouldn’t have seen each other.
“So for us, it was a necessity. We didn’t have a choice. If we wanted to date, we had to start working professionally together on something. We don’t live in one city long enough to have the kind of relationship that happens between 5 p.m. and midnight.”

“She has more lyrical ideas than anyone I’ve ever known. She’s a very good writing partner and has really opened up and inspired me, more than anyone ever has in my life.”

Almost everyone: Sean does admit that his famous father John played a defining role in his career choice.

“The only reason I play music is because my dad was a musician,” Lennon states. “I doubt I would have done it if he hadn’t been. I grew up immersed in music because of him. If he had been a plumber, I would have done something else.”

But since John was a musician, and mom Yoko an artist, Sean says music “has always been such an inherent part of every aspect of my life.”

“I grew up with music just everywhere, and it was sort of like a religion: music and art were above all things,” he says.

“In my family, familial and personal relationships are less important than art. That was the standard of morality I was raised with: that music and art were the only reasons to live. That’s how I was brought up.”