Sarah Harmer is about to go back to the drawing board, and she’s not happy about it.

The Burlington, Ontario born singer, songwriter and activist is currently promoting Are You Gone, her first album in 10 years. Looming on her mind, however, is a fight she’s about to take up with a community that she’s already won once.

Despite the Ontario Municipal Board denying a quarry expansion application to further develop the Mount Nemo plateau in Burlington, Ontario by Nelson Aggregates Co. in November, 2012 – a decision made largely due to the efforts of Protecting Escarpment Rural Land (PERL), an environmental conservation organization co-founded by the musician in 2005 to help protect and ecologically preserve the area – Harmer reports that the aggregate has reapplied for the quarry expansion.

“They want to try again to take the guts out of Mount Nemo,” Harmer warns. “And they’re going to reapply for another quarry application on some of the exact same land that they were defeated on last time.

“I think is outrageous that taxpayers and governments can spend millions of dollars to defeat a bad idea, and then this multinational company can come back and say, ‘Yeah, well, get your wallets and your time ready, we’re going to try again.’

“So, it’s a never-ending thing, unfortunately.”

(Note: In its proposal,  Nelson Aggregates intends to expand its Burlington quarry south in land that’s currently a mix of residential, agricultural and vacant; west on the site of the Burlington Springs Golf Course. It includes proposed ecological enhancements for environmental protection – and promises to close the quarry in 25 years and hand over parcels of land to Burlington and Halton Region that would eventually create Mount Nemo Quarry Park. They estimate would be twice the size of Toronto’s High Park.)

Harmer’s memory of stepping into the initial fray with Nelson Aggregates is still fresh.

“It was an incredible education,” she admits. “It was an eight-year effort and an incredible learning experience for me in the value of  building relationships with people that you otherwise might not think you had much in common: volunteer community citizens.

“Learned a lot of science; learned about having to be there at every little dust-up. Persistence and commitment are a huge, huge part of it.

“When we did win, that was an incredible victory and I barely even read the decision. As soon as I found out we won, I was like, ‘Oh, I’m so done with the Aggregate Resources Act and all of that stuff.’ I moved on.

“But now I’m looking at it again because they’re trying again – and hopefully, the community and everybody will defeat that again.”

Harmer remains an activist, but if you think her numerous interests in environmental protection were responsible for the 10-year gap between 2010’s Oh Little Fire and the recently released Are You Gone – think again. 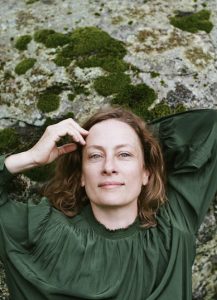 “I invested more in relationships in my life. I got to do these different travel experiences all over Labrador and Greenland – and far up the central coast of British Columbia.

“I also didn’t get in my car for days on end, staying in one place where I live for long stretches of time. I restored an old house, learning how to putty windows and timber frame and just stuff like that – different skills.

“There were a lot of boring meetings about land use issues and endangered species protection. I did some local organizing on those things – and stuff like that.”

Along the way, she also played the occasional gig and wrote some songs – and when Harmer felt it was time to bring them into the world, she recorded them.

“Why now? Because I finally focused for long enough to make it all real. I didn’t really set out to sit out a decade.  There’s no real timeline on creative work.

“I feel very fortunate that I was able to get out of the work cycle in that way. I don’t have exorbitant tastes – I live very frugally –  so I was able to leave lots of open-ended time so I could just be available to different things that crossed my path, I guess.

“And yeah, songwriting – I’m pretty distracted. I’m not a super-focused person. I like to get a lot of things going at one time.  To be able to follow one of them through all the way to the finish line or that completion sometimes takes me longer than other people because I’m multi-tasking a lot.

“I also wanted to experience just being, and not have to produce or be busy or have to show a schedule that was jam-packed. I wanted to sit in a bit of idleness for a while and see what that was like.“

The dozen songs on Are You Gone, released in February, make you realize how much new music from Sarah Harmer was missed: the wistful remnants of longing on the mid-tempo “St. Peter’s Bay; ”  the call-to-action, barn-burning rock of “New Low”  and the easygoing country-rock lull of “Shoemaker” are just some of the highlights of this beautifully crafted album, connected by Harmer’s satisfying alto.

One song that’s drawn particular attention is “What I Was to You,” mainly written about the friendship Harmer had with Tragically Hip singer Gord Downie.

Harmer recalls seeing the Hip at a bar when she was an under-aged teenager. The band was playing ‘60s covers and the audience numbered 10 in attendance.

“That was thrilling,” she recalls. “I’d never heard Van Morrison and Them songs and all these old ‘60s kind of rock tunes that these guys were playing.  In my mind, they were the band’s songs, but I knew they were covers.

“It was sweaty – song after song after song – and I loved their energy on stage. There weren’t really a lot of lulls. They just got on and played tune after tune and it was really impressive.

“So, they were always a blueprint. I started playing in a band called Saddletramps soon after that and when I started Weeping Tile, I had the Hip’s live show – I never got anywhere close to it – but it was always kind of the thing to aspire to.”

She also became good friends with Downie, who passed away from glioblastoma in 2017, and says his and another friendship inspired the album title.

“Gord, to me, was a larger-than-life icon when I was 16 and seeing him onstage – his magic has been really obvious right from the first time I saw him,” says Harmer.

“The idea of this album, in some ways, when I decided to call it Are You Gone, was because of how present and how complex and rich people are individually; how powerful they are and the aura they have.

“’What I Was to You’ and  ‘See Her Wave’ – that’s also written for a friend who passed away and another person who was fairly vibrant. I only met her a handful of times and was so taken by her character – so those things are hard to see dissipate.

“I’m really happy to have a part in the set I think where I can bring that into the present and reminisce – for both cases – what powerful people they were and how their energy still continues.”

Harmer says her motivation behind Are You Gone is simple.

“I just want people to hear the record and have it become something they have in their lives,” she says. “I’m just out there to contribute to the forces of compassion and love…to make people feel good and make them feel something.

“I just want to help move the needle a bit and just share emotions.”