Plundering the past with Phil Collins | Toronto Star

A mature pop titan becomes a covers act for the first time.

“I just bought a second cannon.”

Not exactly the words you expect to hear flowing from the mouth of Phil Collins. But the 59-year-old’s chief passion these days is no longer music, but collecting 1820-1840 era Texas history memorabilia and writing about that fascination for a book that will be out in 2011.

“I’ve become a big collector,” says Collins, relaxing in the bowels of the impenetrable fortress known as The Rogers Building during last week’s Toronto visit.

“Certain people collect cars or buy old instruments: I buy cannonballs and knives and rifles — and I just bought a second cannon. It’s a Howitzer, so it’s not one of those huge things . . . but the book is about the collection, and what this item or this document, what its place in the story is.” 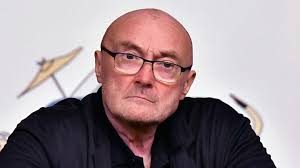 As for his latest vocation as author, Collins, comfortably attired in a black sweater, blue scarf and jeans and sporting a closely-shaven head, wire-rimmed glasses, and a few days stubble, waxes ecstatic.

“I’m lovin’ it,” he declares. “It just started to warm me up a few times in recent years when I’ve done forewords for books or I’ve done articles for magazines, that I’ve really enjoyed the written word. It’s another way of expressing yourself, I guess, and I’m really enjoying this.

“I’ve been at (the book) for about a year, and I’ve got another six months — and of course, it’s never-ending: I just bought 45 more items from buttons to the cannon. It’s never finished; you just keep collecting, but the book’s going to have a cutoff date. It’s always fascinating.”

However, Collins isn’t in Toronto to push his penmanship. He’s here to close a career chapter and drum up awareness for what he swears will be his last album: Going Back, a collection of 18 faithfully reproduced ‘60s-era Motown-heavy soul tunes (29 on the deluxe edition) that celebrate that catalogues of such immortal songwriters as Norman Whitfield, Stevie Wonder, Carole King and Gerry Goffin and the team of Holland-Dozier-Holland.

This week it debuted at No. 2 on the Toronto charts.

Collins, who scored a No. 1 hit with his 1982 remake of The Supremes’ “You Can’t Hurry Love,” says he fulfilled an indulgence with Going Back, which uses The Funk Brothers as three-quarters of the rhythm section and includes his renditions of such classics “(Love Is Like A) Heat Wave,” “Papa Was A Rolling Stone” and “Standing In The Shadows Of Love.”

“I wasn’t intending in making another record, but I hadn’t done this — and this was something that was on my mind,” admits Collins, a longtime resident of Switzerland.

“This is purely a selfish stab at doing something that I’ve always wanted to do. I wanted to try and make the songs sound almost the same as they were done; singing the songs that I’d never got a chance to.

“I had joined Genesis when I was 19 years old. We always played our own material — never really played too much in bars and pubs. So there was never a question of covering other people’s material, apart from my school band, with whom we did a lot of this material.”

Collins, who has sold an estimated 250 million albums as both solo artist and as singer/drummer of Genesis — a startling 12 million of those combined projects in Canada alone — says the timing was right for Going Back both personally and professionally.

“It’s been a lifelong ambition, and I’m glad it took till now to do it, because I think I did it better now than I would have done earlier,” say the hit maker of such pop chestnuts as “In The Air Tonight,” “Sussudio” and “Another Day In Paradise.”

“Even ‘You Can’t Hurry Love’ – I’m not too fond of, because I wanted to try and replicate that same sound. I was younger. I wasn’t quite as on top of it I was now. This album was great fun to make, one of the most fun records I’ve made.”

Collins overcame a couple of health impediments to make the album: the “loss of certain frequencies” due to a viral ear infection, and even more troubling, neural damage to his hands that robbed his fingers

“It was on the Genesis tour that somewhere a nerve popped out and I had four vertebrae crushing my spinal cord,” he explains. “I didn’t know anything was wrong because it didn’t hurt.”

“I still can’t feel the ends of my fingers now,” he says, raising his left hand.

“I can’t play the piano, and drumming – as soon as I started playing, the stick flew out of my hand. So I taped the stick to my hand on these sessions and got through it.

“It was frustrating, but with technology and a great engineer, we got it right.”

Collins wasn’t going to perform Going Back, but said he was convinced by his girlfriend, WCBS news anchor Dana Tyler, to play a handful of shows in Philadelphia, New York, London and Montreux. The DVD Going Back — Live At The Roseland Ballroom is out on Eagle Rock on Nov. 1, but that will be the extent of the tour – and Collins’ touring – for good.

He’s fine with it.

“I’m trying desperately hard to slam on the brakes and do nothing,” says the thrice-divorced Collins. “I’ve got two young sons, and in some respects, this (gestures with hands) gives me an excuse. I can’t go out and do what I used to do. I can’t go out there and do ‘In The Air Tonight’ so it’s a good enough reason.

“Plus, I’ve got five kids and I’ve had a sort of patchy personal life — but now I actually have an opportunity of staying home and taking them to school, and taking them to football games, and just being there — instead of being in a hotel room, which I’ve done in my life. So I’m at a time where I playing the drums is less important to me.”