The duo behind Oh Wonder — playing the Danforth Music Hall for three nights — are quick to say they’ve been lucky.

What’s that old saying? One makes plans and God laughs?

Not that there are any religious connotations surrounding the generally low-key, dual-vocal pop created by London-based electronic pop duo Oh Wonder, but record deals and world tours weren’t something that was in the cards when they first got together in 2014.

“The whole project is a hugely happy accident,” said Josephine Vander Gucht during a conference call with the Star Friday before a Chicago gig — and their three nights at the Danforth Music Hall, starting Monday. “Originally, we had planned just to write for other people, but three-and-a-half years later we’ve found our groove.”

Up until they met, both Vander Gucht and her musical partner Anthony West were pursuing separate careers: she as a solo artist under the noms-de-plume of Josephine and Layla; he with the bands Tonight Is Goodbye, Futures and We the Wild, known in hindsight for West’s involvement with them. 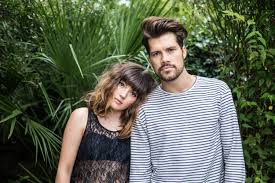 Their “Waterloo” moment occurred when the duo got into the studio together in 2014, created the song “Body Gold” and posted it online with the goal of finishing one tune per month.

“It’s remarkably easy for us to write together,” says West. “We put songs online purely just to pitch to other artists. The reason the both of us sing is so we could pitch it either to a male or a female. So Josie sang to pitch to female artists and I sang so a male artist could hear it and go, ‘Oh . . . ’ That was also totally inadvertent.”

“Body Gold,” a love ballad about personal discovery that pretty much reflects the easily digestible Oh Wonder sound — a catchy melody, even catchier chorus, and a comfort level between the two collaborators that seems to be the intangible “it” factor — sparked an immediate online reaction.

“We were anonymous, so we couldn’t ask people to listen to it,” she admits. “People naturally flocked to it so we knew immediately and distinctively that something was different.”

Suddenly the website was deluged with requests and the duo were offered label deals.

“We were approached quite early on by labels all around the world,” says West. “Which was quite a shock to us. We didn’t even respond to anyone in the first six months because we just wanted to focus.

“But I think that’s what started Oh Wonder: everything just seemed very simple and easy and there were no hurdles to jump over.”

But the evolution of Oh Wonder, which released a self-titled album and eventually signed with Island Records, did bring about other concerns . . . mainly about becoming a performing act.

“After we released that record, there was certainly demand for live shows,” Vander Gucht says. “So we just booked four shows in the beginning, which were New York, London, Paris and L.A. They sold out really, really quickly and made us think, ‘Well, maybe we should tentatively explore the rest of the U.K., Europe and a bit more of America.’

“And we haven’t stopped touring. We’ve actually found a great love and passion for touring. We didn’t necessarily want to play live, but now that we’ve been through it for a few years, we feel we’re the luckiest people just to be playing around the world. It’s just the best — it’s amazing!”

Now promoting their sophomore album Ultralife live as a four-piece — and enjoying views in the multi-millions for such videos as “Drive,” “Lose It,” “Lifetimes,” “Ultralife,” and “High on Humans,” plus a collective base of one-half billion streams of songs off their two albums — Oh Wonder has a particularly soft spot for the Danforth Music Hall. 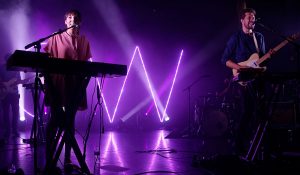 “We came to Toronto about a year ago and we played the Danforth, and I think it was the quickest-selling show on the tour,” recalls West. “It was such an incredible evening: the first show we ever played in Canada. For us to play three nights there is so cool.”

Adds Vander Gucht: “It remains one of our favourite venues.”

However, it’s not the only venue they’re playing: there will be a fourth surprise acoustic show at an undisclosed location during the afternoon of Sept. 20 to support Sofar Sounds’ Give a Home campaign, which will feature 300-plus performances in 60 countries that day to raise awareness and funding for the international refugee crisis, in association with Amnesty International.

“We’ll be in someone’s living room, I hope, in Toronto,” says Vander Gucht.