Saturday’s concert at Olympic Island had an enviable conclusion, and some unfortunate openers.

Nick Krewen
Special to the Star,
Published on Mon Jun 21 2010

Playing to the hometown crowd has its advantages.

While Saturday’s Olympic Island Festival 2010 concert marathon headlined by Pavement may have marked the return of the influential New York lo-fi cult legends to Canada, there was no mistaking that this was Broken Social Scene’s party.

Despite the fact that from the very first notes and falsetto harmony hook of “Cut My Hair” — a song that singer and guitarist Stephen Malkmus played while sandwiching a beach ball between his axe and his torso — Pavement was in very fine form, the Toronto collective led by Kevin Drew and Brendan Canning couldn’t be matched in terms of sheer exuberance. 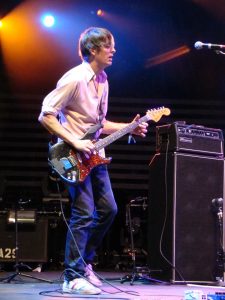 It didn’t help Pavement’s cause that the Broken Social Scenesters brought an everything-but-the-kitchen-sink approach to their set, marked by a parade of cameo appearances that’s an alt-music lover’s wet dream: a partial list included Leslie Feist, Emily Haines (wearing a daring black dress that barely covered her back), Sebastien Grainger, Pavement’s own Scott “Spiral Stairs” Kannberg and Tortoise’s John McEntire.

And if the headliner was enjoying a good night — even the slightly grating background “screams” of percussionist Bob Nastanovich seemed to add to, rather than distract from, Pavement’s overall solid cohesion on numbers like “In The Mouth Of A Desert” and “Trigger Cut” — the BSS boys and girls kept the momentum, at a relentless and feverish pitch that kept the sold-out crowd surrounded by the lush Olympic Island parklands as heated as the sweltering sunny day that graced them.

Opening with “World Sick” as a six-piece from their new Forgiveness Rock Record and a wall of guitars, BSS quickly segued into “Stars And Sons” and expanded the lineup accordingly. It seemed that every time you glanced at the stage, a new member would step forward to add a harmony or a layer of keyboard to bolster the sound. Julie Penner and Timber Timbre’s Mika Posen would add violins; Charles Spearin led a six-piece horn section, and numbers like “Art House Director” and “Sentimental X’s” would become full-blown epics, fuelled to greater intensity by guitarist Andrew Whiteman’s brilliant flashes of sonic lightning. 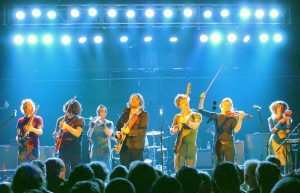 The crowd couldn’t be more into BSS, and by the time the pre-encore finale of “Meet Me In The Basement” ended in a joyful cacophony of symphonic bliss, Pavement clearly had their work cut out for them. The Pavement and BSS combo capped a solid day of great music, although openers — the so-called Toronto Revue, consisting of Flash Lightnin’, The Beauties and Zeus — received the short end of the stick. Hearts particularly bled for Flash Lightnin’, whose worthy and aggressive kickoff was witnessed by approximately 60 people, mainly because the crowd wasn’t allowed into the venue until after singer/guitarist Darren Glover began wailing away with Led Zeppelin-like power.

Timber Timbre, frankly, were a bit dull with their bluesy dirges, and Baltimore’s Beach House was solid, if unspectacular. The concert truly kicked into high gear with Seattle’s Band Of Horses, whose disciplined folk-country sound — fronted by the sweet tenor of Ben Bridwell and reminiscent of the Jayhawks — bodes well for a major mainstream breakthrough.