Energized by its first ever chart-topping album, Black Sabbath gives fans a magical night to remember.

After 44 years of juggling prosperous bands and solo careers, as well as a TV show that became a prototype for some of the reality dreck currently inhabiting the tube, one would imagine that Ozzy Osbourne has seen it all, done it all, and that the ability to surprise him would be a Herculean task.

Yet, it seems that reaching No. 1 on the Billboard charts with 13, the Black Sabbath semi-reunion album that features the hard rock pioneer’s first original studio material since 1978, has turned the trick. 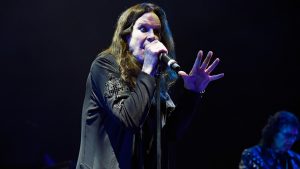 An appreciative Osbourne mentioned this stat a few times over the course of an entertaining two-hour set at the Air Canada Centre Wednesday night that focused heavily on Sabbath’s groundbreaking history, but still left room for an injection of the present.

“We’ve been doing this for 44 years and this is our first No. 1, and we wanted to thank you from the bottom of our hearts,” said Osbourne, who seem positively delighted to be back sharing the Black Sabbath stage with guitarist Tony Iommi and bassist Geezer Butler.

Alas, the fourth part of the puzzle, drummer Bill Ward, bowed out from what was originally announced as a full-fledged reunion due to a contract squabble, but a youthful Ward-inspired Osbourne solo band stickman Tommy Clufetos pounded his kit so aggressively that he was an agreeable substitute.

However, it was the surprisingly animated High Priest of Rock himself that kept the estimated 15,000 Black Sabbath predominantly male devotees on their toes with his head-banging antics.

From the very first note of the opening number “War Pigs,” Osbourne urged his followers to clap their hands and wave their arms. He scurried from one side of the stage to the other, his outstretched arms almost demanding an embrace before he retracted them.

Then raced back to the microphone’s pole position at the centre stage, rocking his torso back and forth to the hefty blues-influenced rock rhythms, jumping up and down as the spirit of the music moved him.

Then he doffed his ankle-length overcoat, ran in front of Clufetos’s massive double-bass drum kit, grabbed a waiting bucket of water and poured it over his head.

His shoulder-length mane now slicked back with water, he returned to the microphone, the combination of the drenched look and his eyes, blackened with mascara, making him appear otherworldly and possibly sinister, especially magnified by the camera and projected on a gigantic video screen positioned behind the band.

And that was just the first song.

To his credit, the charming Osbourne never relented when it came to inciting the crowd to join him, and the audience loved every minute of it, singing along at the top of their lungs to favourites like Master Of Reality’s “Into the Void” or rocking away to Paranoid’s “Fairies Wear Boots.”

Black Sabbath certainly didn’t skimp on the tunes, either: each one was a marathon workout that featured generous heaps of Iommi guitar riffs and solos.

As far as Osbourne’s voice is concerned . . . well, his range has seen better days. He was fine as long as he remained somewhat motionless and focused — newer songs like “End of the Beginning” and “God is Dead?” were particularly potent — but when he hit the lower register for “Black Sabbath” . . . well, let’s just say it was a noble effort that fell short as he wavered.

In the context of the evening, though, the few instances of questionable pitch didn’t matter. As the evening wore on, and several buckets of water later, Osbourne’s enthusiasm — he’d even applaud the audience for their own frenzied reaction — and the band’s disciplined attack created an event that just got better the longer it lasted.

By the time the show ended with “Children of the Grave” and a spirited “Paranoid” thrown in for the encore, Black Sabbath fans could offer no complaints for a magical night they’ll long remember.

And with no disrespect to Clufetos, who did an outstanding job, perhaps next time Sabbath fans will even get their just re Ward.

Be the first to comment on "Black Sabbath and Ozzy Osbourne at Toronto’s ACC: review"