Are house concerts the next big thing? | Toronto Star

One Toronto family plays host to concerts — and they’re not alone.

Nick Krewen
Special to the Star,
Published on Sat Jan 01 2011

Next weekend, Joanne and Blair Sleightholm are bringing the Bluebird Café concept to their spacious Yonge and Eglinton-area home.

Inspired by the tiny Nashville restaurant that launched the songwriting careers of thousands, the Sleightholms are staging their second series of in-the-round performance house concerts for two, possibly three shows on January 8 in their living room, which holds 45 people. 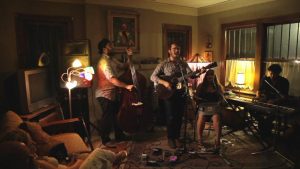 Reasonably priced at $10 — all proceeds go to the musicians and sound-system rental — the two 90-minute acoustically-driven shows beginning at 6 p.m. and 8:30 p.m. will feature local country music warbler Lindi Ortega; Indiana folk singer-songwriter Stephanie Lambring and two of the Sleightholms’ own budding artists, Madeleine and Gavin Slate; the former is a Nashville songwriter and the latter has just finished recording his debut album with producer Colin Cripps.

So why are the Sleightholms opening their abode to the public? Joanne Sleightholm says it’s a natural extension of their music loving lifestyle.

“Our house has always been filled with music, and people came to our house to jam all the time,” says Joanne, whose fulltime occupation is teacher consultant. Her husband Blair is a teacher.

“After dinners, we’d always have people over with guitars and we always sang around the living room. It didn’t matter — whenever people came over, we did that.

“So I got this idea: let’s just have kids come and sing at the house. I sent out e-mails to friends. The kids sent out e-mails, and within 24 hours, two shows were sold out. And we did that in June (2010).”

The allure for people to invite musicians into their homes for intimate shows seems to be growing, and not just locally. In Winnipeg, renowned promoter Mitch Podolak says the demand for house concerts is skyrocketing, and he’s generating the business to prove it.

Since 2006, Podolak — founder of the Winnipeg and Vancouver Folk Festivals — has been operating Home Routes, an organization that books performers exclusively into house-concert circuits across Canada.

“As of February 3, 2011, we will have 14 circuits of six performers,” says Podolak. “We’re coast-to-coast-to-coast and we’re growing at an extraordinary rate.”

Even established names like Valdy, Barney Bentall and Tom Wilson are touring homes, as clubs dwindle: Podolak says there’s plenty of work for performers, especially in communities that are a little off the beaten track.

“We’re trying to fill two needs at once: the needs for artists for places to work and provide access to live music for rural Canada, primarily. We’re in the cities, too, but we’re way, way more in the small towns.”

Podolak says the admission to attend a house concert is $15, with the musicians keeping 85% of the gross and Home Routes retaining 15%. Musicians are billeted and fed by homeowner presenters, and Podolak says performers can net as much as “$2,000 per week.”

Figures provided on the Home Routes website ( www.homeroutes.ca) also illustrate how quickly this business is growing: In the 2007-2008 season of four circuits across Canada, artist revenue was pegged at $133,000. For 2009-2010, an additional 10 circuits were implemented for a projected artist revenue of $512,000.

Podolak says there’s also an increased demand by potential presenters champing at the bit to get involved, even though they see no profit and bear the expenses.

“We have 40 on the waiting list,” he states. “We also expect by next fall to be somewhere around 18 or 19 circuits in Canada.”

Podolak also says next fall his first U.S. circuit will launch (in North Dakota), and that the goal of his six-member office is to reach “90 circuits in North America in order to make a really decent living.”

“I like the no-nonsense experience,” says Hoskins, who usually books a handful of house concerts a year through his website, gregoryhoskins.com.

“A lot of them you can do without sound systems. It’s just a real nice thing to be able to play your songs and not worry about the other stuff — loading in and sound checking.

“There’s also an opportunity to have a different kind of communal experience when you’re sitting 30 feet away from the farthest person.

“For an audience, it’s kind of a mind-blowing night.”

Although he’s played everywhere from mansions to livingrooms, and been fed, paid and sold some records there, Hoskins says some gigs can be challenging.

“I did one, where a woman’s boyfriend was a biker, and that was okay. I played to five people, and two of them were over 80 and couldn’t speak English. But she wanted me to come down and make an entrance on a spiral staircase, so I bailed.”

Joanne Sleightholm hopes that her future house events (ask for details at josleigh@yahoo.com) will become a bi-monthly series beginning in March, regardless of whether her kids are involved.

“We love it so much, we’d even do it for other kids,” she insists. “Being teachers, we love helping kids be better.”

Be the first to comment on "Are house concerts the next big thing?"