Toronto was home of the Rock and Roll Revival Concert chicken incident and the Exhibition Stadium riot, but this time Cooper’s just here to sign autographs

Ol’ Black Eyes is back.

The legendary Alice Cooper, who introduced the concepts of shock and horror into rock ’n’ roll, theatrics into live concert performance and eyeliner use to glam bands, is returning to Toronto and the Metro Convention Centre Thursday through Sunday to sign autographs at Fan Expo Canada.

And out of all the celebrities booked here for the weekend, it’s Cooper — born Vincent Damon Furnier in Detroit 65 years ago — who perhaps owes the most to the city in terms of career notoriety. 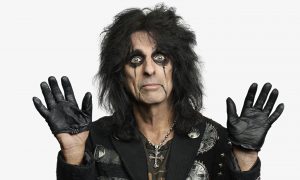 Even before meeting Bob Ezrin — the influential and innovative Toronto producer Cooper refers to as “our George Martin” and the man responsible for helping the Rock and Roll Hall of Famer create such impressive anthems as “I’m Eighteen,” “School’s Out” and his groundbreaking Welcome to My Nightmare — this town helped establish the master of musical macabre’s infamy many times over.

“I did a lot of recording there with Bob Ezrin,” notes Cooper, who has released 26 albums and sold an estimated 50 million records worldwide.

“The whole Rock and Roll Revival Concert and the infamous chicken thing . . . a lot of things happened in Toronto.”

On Sept. 13, 1969, the Alice Cooper Band was performing on a bill that included an eclectic mix of Chuck Berry, The Doors, Junior Walker, Chicago and the surprise appearance of John Lennon and Yoko Ono with Eric Clapton when Cooper elected to tear open a pair of gigantic feathered pillows at the end of his set.

Somehow a chicken ended up being thrown onstage and when Cooper threw it back into the audience, the poor bird was torn apart by the crowd. By the time word had reached Frank Zappa, who had signed Cooper to his Straight Records label, the myth had grown to pre-Ozzy bat-biting proportions, with rumours that Cooper had bitten the head off the chicken during his wild and crazy stage show.

“I had never seen anything that was a bigger tempest in a teapot than that,” says Cooper. “It was just the simplest thing. Somebody throws something onstage; it gets thrown back into the audience. And you expect that’s it, no big deal. I don’t think anybody expected the audience to tear the chicken into pieces and throw it back onstage, especially at something billed as the Toronto Peace Festival . . . and especially because the first five rows were all in wheelchairs. That’s what made it even more bizarre.

“When you have an image like Alice Cooper and it’s in that era where there was no Internet, so everything was urban legend. By the time it got to Los Angeles and Frank Zappa heard about it, he called me up and said, ‘Did you kill a chicken?’ And I said, ‘No.’ And he said, ‘Well, don’t tell anybody that. They love it! Take the brunt of that because it just adds to your image.’

“I mean, I’m an animal lover. I would never hurt an animal. And I know that we didn’t bring it. But that spread like wildfire all over the world that this Alice Cooper character was like a circus geek. And it fit the image, so why wouldn’t it be true?”

A year later, Cooper’s stage antics earned him some serious credibility at the Strawberry Fields Festival, held at Mosport Park in Bowmanville during the Aug. 7 weekend.

“We had yet to meet Bob Ezrin,” Cooper recalls. “We were a psychedelic, Yardbirds-type of band with an amazing image back then, but there was no music to really hang your hat on until Bob came along and filtered it all.”

The next few years were spent riding the crest of the Ezrin-produced albums Love It to Death, Killer, School’s Out and Billion Dollar Babies, as Cooper implemented such garish theatrics as hanging himself, chopping his own head off with a guillotine and draping a boa constrictor around his neck.

His timing was perfect.

“Rock didn’t have a villain,” says Cooper. “It had tons of heroes: Paul McCartney was a rock hero. Pete Townshend: rock hero. Mick Jagger: rock hero. So you had all these heroic Peter Pans and no Captain Hook. And I kind of went, well, we always wanted to do theatrics; just make the stage come alive more.
“And with a character like Alice Cooper, who comes off as the Moriarty of rock or the Darth Vader or the Bela Lugosi, then you can get away with making the stage show come alive.

“If you say ‘Welcome to my nightmare,’ you just don’t say it, you give them the nightmare. All it really took was a lot of imagination, time, money and a lot of rehearsal, and you’re crawling so far out on a limb you’re either going to be genius or an idiot: there’s no middle ground.
“But it worked. I think the audience was looking for more than guys up there just jamming. It was time for the next move.”

As the ’70s progressed, tastes changed and punk arrived. Cooper adapted with the times, released an album of new wave music called Flush the Fashion (with contributions from another Torontonian, Fred Mandel) and went on tour.

It mostly went off without a hitch — until Cooper reached Exhibition Stadium on Aug. 19, 1980. Shortly before his scheduled showtime, it was announced that Cooper couldn’t make it and fans didn’t take kindly to the news: they rioted.

“That was unbelievable,” Cooper remarked. “First of all, I have bronchial asthma. And I’ve never, ever missed a show. Ever. That was the first one; that and there was a show in Santiago, Chile, where I had food poisoning and couldn’t go on. They were the only two I missed in 45 years.

“That day on the weather, they said this is the worst pollution that Toronto has ever had. I couldn’t breathe, let alone sing. So we thought, ‘We’ll reschedule and come back and do this thing.’ I had no idea the whole world was going to collapse. When you’re a rock star, you don’t really think of yourself as that important. If the fans have a reason, and it’s been building up and it’s summertime, and all of a sudden they just let loose.

“It was totally a trigger response and again, we were shocked because we always figured Toronto to be a bit more conservative. But it just exploded.”

And while one of his career lifts wasn’t provided by Toronto per se, Scarborough native Mike Myers helped Cooper’s popularity achieve new heights with a lengthy cameo in the 1992 box office hit Wayne’s World.

“It introduced us to another audience,” says Cooper, whose Milwaukee concert was a plot point in the memorable film.

“Mike Myers was looking for an iconic character to do the ‘We’re not worthy’ segment with and I was the perfect guy for that. At first, I was just supposed to do the song, and then Mike comes over and says, ‘Oh, I have some dialogue.’ I didn’t expect five or six pages of dialogue, and every time we did another take it was completely different. And Mike and (co-star) Dana (Carvey) were doing everything they could to make me laugh.

“It ended up being really funny and now I’m stuck with the ‘We’re not worthy’ thing forever.”