The singer-songwriter, who will return to the Sony Centre for the Performing Arts on June 9, says she wasn’t aware of how much impact she’s made during her career.

A master of the Stratocaster, 10-time Grammy Award recipient Bonnie Raitt has always been perceived as a trail-blazing role model who inspires female musicians to pick up the guitar and express their individuality. 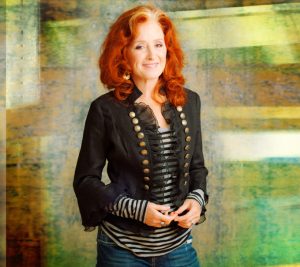 But it was just four years ago that the 67-year-old Raitt, who returns to the Sony Centre for the Performing Arts on June 9 with Royal Wood and whose blues-rooted music is a soulful stew of rock, R&B and pop, discovered just how much of an impact she’s made during a career that’s lasted 47 years.

“I don’t think I was aware of it until recently,” Raitt, who was honoured with an Americana Music Association Lifetime Achievement Award in 2012, an Americana Grammy for her album Slipstream and was featured in a December 2016 Oxford American cover story.

“When I go to those events, that’s when my gene pool of musicians — those women — come up to me and say, ‘I really grew up listening to you sing and play,’ ” Raitt said in a phone interview last month from California.

“And in the Oxford American, I read about all these women blues artists like Rory Block who gave me some great props; Susan Tedeschi and a bunch of people I admire turn around and talk about how they appreciate me and my guitar playing. I’m very proud to be considered in such high esteem by so many people I already like.”

It’s come full circle for Raitt, who is currently touring behind her 17th studio album, 2016’s Dig In Deep. The daughter of Broadway singer John Raitt earned her apprenticeship as a college student performing with such blues greats as Mississippi Fred McDowell and Sippie Wallace after being turned onto the genre via the album Blues at Newport 1963.

“I had not been familiar with the country blues before,” Raitt recalls. “I’d heard the Rolling Stones and Slim Harpo and Howlin’ Wolf and even some of The Beatles’ R&B covers, but the first time I heard Mississippi John Hurt and Reverend Gary Davis and John Lee Hooker was on that record. I was 14 and every artist on there — from Brownie McGhee and Sonny Terry to John Hammond Jr. — absolutely knocked me out.

“I already loved Odetta and folk music and gospel music as well, but it wasn’t until I heard that record that I was aware of the country blues. Then it became really hard to decide whether to get the new Bob Dylan or Beatles or Stones record with my allowance, or one of those country blues records. It was a good incentive to get a side job.”

McDowell, one of the first Tennessee blues singers to score widespread recognition — he had also spent some time in the Mississippi Delta — gave Raitt a firsthand education in the blues.

“Fred McDowell taught me that you don’t have to be an older black person who lived through poverty in the South in order to play the blues,” Raitt explains. “From John Hammond to Koerner, Ray and Glover to Paul Butterfield — and all the British blues artists, even the Stones — there’s something about soul music and blues music that really cut to me. And Fred McDowell instantly appealed to something in my heart.

“I loved his sense of humour, and what I most got out of him was the passion that he played. He used to just throw his head back and lift his knee up, take that slide guitar all the way up the neck. And I would just watch transfixed, because at that point, I had only heard records. Then when I met Fred and got to see him live, I was just blown away by the power of one guy and a guitar to just hit so many emotions. I think I just fell in love with the blues as deeply as I ever was going to get with Mississippi Fred McDowell.”

“Sippie Wallace taught me a lot about men and what it was like for her in the business,” Raitt recalls. “I learned a lot from her just being a woman instrumentalist and a songwriter and the way that she did and didn’t get pushed around or get respect, either in her personal life or in her business life. It’s kind of a precautionary tale of like an older person who would have been there.

“In 1970, my opportunities — like my access to a good lawyer — was completely different than hers. But I learned what it was like to be Black in the 1920s and ’30s and ’40s by my associations with all those artists. It was like a living history to be able to find out what Jim Crow and segregation and racism meant — and just the joy of playing juke joints and being on the Vaudeville circuit.

“I got a window into a part of our culture that most people don’t get, and to this day it’s one of the greatest gifts I’ve had.”

Since obtaining her first record deal while opening for McDowell in 1970, Raitt has sold more than 20 million albums, although her career didn’t really take off until her 1989 breakthrough album Nick Of Time, which won three Grammys including Album of the Year and 1991’s three-time Grammy winner Luck of the Draw, which housed her biggest hit: “Something To Talk About,” written by Canadian Shirley Eikhard and nominated for Record of the Year.

For Dig In Deep, Raitt has maintained the formula of mixing covers with originals: there’s a funky update of the INXS hit “Need You Tonight” and the splashy blues-steeped rocker “Gypsy In Me” by longtime contributors Gordon Kennedy and Wayne Kilpatrick alongside a handful of Raitt-written uptempo tunes and ballads.

“I’m always looking for how songs fit into the whole picture of an album,” Raitt explains. “So there’s a mix of all kinds of musical styles and you have to couch the ballads in just right and open it a certain way and close it a certain way. The same as with the show — so when I’m picking songs, primarily I don’t want to repeat myself and I don’t want to try to aim for something musically or lyrically that I’ve covered better in the past.

“After this many records, it gets to be a little bit daunting. So that’s what motivated me to write and co-write the songs I did: come up with new versions of grooves that I really like, with a new set of lyrics and new guitar licks to play, and a new twist to them. When I’m looking for tunes, I just let the better songs rise to the top and the ones that fit together make the record. Other ones might get saved for another one down the line.”

You can’t really interview Bonnie Raitt without mentioning her activism and altruism. Each tour she offers Special Benefits Seating tickets. While most artists who offer these seats under the guise of “platinum seating” pocket the profits, Raitt turns her take into charitable contributions.

“There’s about 100 different groups — we really have a lot of causes — music and blues education, campaign reform and Wall Street reform — fair elections — safe energy plus the whole issue of climate change,” she says. “Some of those groups are simply just charity groups that are doing humanitarian relief. We do $1 of every ticket, and then along the way we kind of scalp our own tickets, so the difference between the cost of the ticket and whatever we’re charging, that goes to these groups in a big fund. We’ll be taking some money from the Canadian tour and that will be going to Canadian causes as well.”

As for living in Trump’s America, Raitt is encouraged by some who are taking a stand in terms of public demonstrations against his policies.

“Everybody’s woke,” Raitt says. “There was a lot of apathy and as an old activist, I’m happy to see people up in arms again, so to speak. When people figure out the environmental and health and economic impact of what these policies are going to mean for a lot of the folks I think voted for Trump, they’re in for a rude awakening.”

But one of her biggest concerns is how certain digital businesses continue to offer lopsided agreements to musicians that dispense pennies to artists.

“It’s great when you have YouTube and streaming services,” Raitt declares. “Somebody’s making billions of dollars and it’s not the artist. That’s where I have a problem with it. It’s not fair to be making so much money for somebody else and not getting part of it.”