NASHVILLE, TENNESSEE: She once raised a ruckus at the Juno Awards by donning a wedding dress and reciting vows, formerly dressed like a cowpunk rodeo spinster and at one time claimed to be the spiritual reincarnation of country legend Patsy Cline. 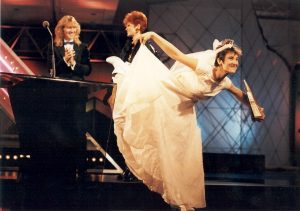 k.d. lang at the JUNO Awards

That was three years ago.

Nowadays, k.d. lang, the 26-year old pride of Consort, Alberta (population 650) – is treated with respect – a respect earned on her own terms.

Nineteen eighty-seven was a good year for k.d. After winning the Juno as Female Country Vocalist Of The Year and Entertainer and Vista award categories in the Canadian Country Music Association Awards (CCMAs), lang was named Best New Female Singer by Rolling Stone  magazine’s critics’ poll.

She also recorded a top ten remake of “Crying” with the song’s creator – the immortal Roy Orbison, and appeared in a star-studded line-up that included Bruce Springsteen and Elvis Costello in an Orbison concert video that appeared on cable television.

The most recent feather in her cap is her third album, Shadowland.  Overseen by Patsy Cline’s producer, Owen Bradley, Shadowland  is a big crossover hit in the States – rocketing up American pop and country charts. The album just reached gold status (50,000 units sold) in Canada last week – finally equating lang’s commercial success with the critical acclaim she’s beenreceiving for years.

Currently in Europe for a string of concert dates, she appears at the Amsterdam Pop Festival tomorrow night, and next month she returns to the U.S. for shows opening for Lyle Lovett and Dwight Yoakam.

But even with Nashville at her feet and international acceptance looming, former Red Deer College student kathy dawn lang feels she’s remained true to the vows of integrity she made while clutching a bridal bouquet to accept the Juno Award for Most Promising Female Vocalist in 1985.

“Absolutely,” said lang during an interview at her record company’s Nashville office. “Certainly my idea of compromising has changed with my maturity and understanding of the business. I don’t think I’ve compromised to what I didn’t understand or why I was doing it. There are things I have done for the business because I feel I want to accomplish, and in order to accomplish, you have to sometimes do strictly business things.”

One of her achievements was the realization of a lifelong ambition to work with 78-year old producer Owen Bradley, who recorded her idol Patsy Cline, as well as Conway Twitty, Loretta Lynn, Brenda Lee and Kitty Wells for Decca Records over a 37-year stretch. 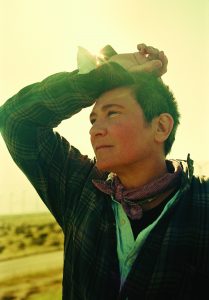 “It was very magical,” lang said of the Shadowland  sessions. “He was very easy and very interesting to work with. Certainly his resume would make anyone happy to work with him.”

Although she was thrilled by the experience, lang said the session – recorded at Bradley’s Barn studio in nearby Mount Juliet – contained few surprises.

“It went very much the way I thought it would,” she stated. “It was very, very fast. The actual recording of the 12 tracks took six days, while the mixing was done in four. The whole thing was completed in 10 days.”

lang said she prepared Shadowland  by listening to the music of jazz vocalists and sax players. “I think jazz and blues are both very important to country music,” she said. “They influence swing, they influence western music, and certainly blues has influenced both jazz and country.

“But I don’t see any seperation in any type of music. I see country as a type of opera and as a type of folk.”

She pauses a second before continuing.

“I do see a seperation in a commercial sense – but not in a fundamental emotional sense.”

lang said what she learned most about working with Bradley was an inner confidence.

Although she’s worked with some big celebrities, does she feel intimidated?

“Intimidated isn’t the right word,” she replies.”They’re great people but they make me feel comfortable, and I’m very self-assured myself. I’m obviously very flattered, and it’s very motivating. Probably the most beneficial thing to this business is meeting the people that you admire.

“I just take it in perspective. Certainly if you work hard enough, and you prove yourself, and gain respect in those circles, you become one of those people.

“They’re really the same as you – they’ve just worked more years. I certainly have been blessed in 1987. It’s been very exciting for me.” 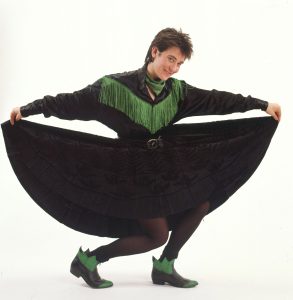 lang – who shuns dairy products and smoking to protect her voice – first began performing at wedding showers and birthday parties around Consort when she was 13.

“I’m pretty well a natural singer,” said lang, who has two older sisters and a brother.” I did have a vocal coach when I went to college. I took lessons with a classical instructor – David Astor – for about a year and a half, mainly to expand my upper range.”

lang says she prepares for her concerts through stretching and reflexology exercises, although the closest she’ll come out East this summer will be an appearance at the Canadian Music Country Week this September in Toronto. The rest of the year will be confined to recording a new album with her band, the reclines.

“I’m certain my experience in the studio with Owen will apply to the way I make records in the future with the reclines,” asserted lang, who enjoys cooking, riding her motorbike and visiting her family as favorite pastimes.

“However, the musicians that I worked with on Shadowland  have been in the studio for 20 to 30 years, and they’re playing the type of music that is very familiar to them. The reclines and I are trying very hard to be progressive, so it’s a totally different approach to making a record.”

lang also swears that she won’t relive the experience she had making her first album for Sire, Angel With A Lariat.  There were reports of constant spats with producer Dave Edmunds, and lang admits there was tension in the studio.

“I don’t regret it,” says lang.”I think that was obviously fate. I’m sort of glad it didn’t become a monstrosity of a hit, because instant success is a hard thing to deal with. I think Dave Edmunds was obviously the wrong choice.”

“However, it wasn’t necessarily my choice. It was a conglomerate choice, and for me – I just wanted to make a damn record. That was the direction we were going in , and I said, ‘yes, yes.’

“I’m older now, a little more mature, and a little more used to the business side of the musicindustry. I think it’s the same with the reclines. I don’t think Angel  was too clean, I think quite the opposite – I think there was too much mid-sound and way too much reverb. I think it was dated, to tell you the truth.

“It was a very stressful time in the studio. It wasn’t an easy recording session at all, and I think the stress is on the record. There’s still an edge to it, but it’s definitely not the edge I present onstage.”

lang said she would also like more time to write, but finds it too exhausting to compose on the road.

“When I do have time to write, it’s very definitely a scheduled slot for writing,” said lang. “I’ve only really had two of them since 1987 – a total of four weeks. It’s impossible to write on the road for me, because my creative energies are dispersed at the end of the day, and there’s no time between interviews and performing and being on the bus – it’s just impossible. It’s a totally different train of thought. But we have over half the material ready for the next reclines record.”

Does she have a favorite song on Shadowland?

“No,” she replies with a smile. “They’re all children.”