Look up the word “ambitious” in the dictionary, and you might just see Josh Ramsay’s picture staring up at you.

There seems to be no shortage of drive in the young Vancouverite, whether it concerns his eclectic pop band Marianas Trench, one of three acts (including All Time Low and These Kids Wear Crowns) opening for Simple Plan at the Air Canada Centre Sunday, or his numerous writing and production duties for various 604 Records label mates like pop siren Carly Rae Jepsen (signed in the U.S. the other day to Justin Bieber manager Scooter Braun’s new label), country singer Melissa Rae Barrie or punk pop rockers Faber Drive.

“If there’s one thing that I do, it’s ambitious stuff,” laughs Ramsay, co-writer of Jepsen’s Canadian smash “Call Me Maybe,” down the line from an Edmonton tour stop. “I always do things that I feel are just a little bit beyond my actual ability.”

Case in point is Marianas Trench’s third and latest epic, Ever After. Ramsay, who serves as the band’s chief songwriter, front man and guitarist, fashioned a 12-song, 54-minute fairytale that taps into influences ranging from Beach Boy-flavoured harmonies and rhapsodic Queen-like orchestration to electrobeat grooves employed by any number of modern-day dance pop acts.

But he says extending himself is the only way he learns.

“I couldn’t think of a better exercise as a songwriter and producer than to work on a whole bunch of things that are nothing like what you do,” he notes. “I take all those tricks I’ve learned in other genres, and bring them all to Marianas. It adds more diversity.”

“We have a whole bunch of production that we’ve never done before, and that’s fun for us,” Ramsay explains. “Having props on stage and marks that you have to hit all the time, there’s another element of thinking during the show than just standing there and playing. You have more audience area that you have to cover — you just can’t entertain the front row.” 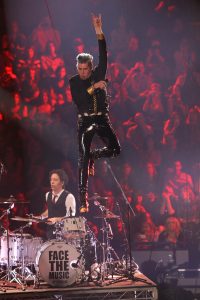 Ramsay admits that due to his band’s support role, the Simple Plan tour isn’t conducive to playing the latest effort, up for a Juno Award for Pop Album of the Year, as it should be heard.

“There are no stops on the album — it’s one continuous piece of music with interludes between every song,” he clarifies. “So when we do it live on this tour, we’re not doing it back to front, but we are doing it in pieces so people get to see parts of the story.

“So they’re seeing two or three songs that are back to back. There’s dialogue that we’ve recorded, and we’re reading it because the album package comes with a storybook. I feel that with this tour, people are seeing the first act.”

Be the first to comment on "Marianas Trench grows ever broader"